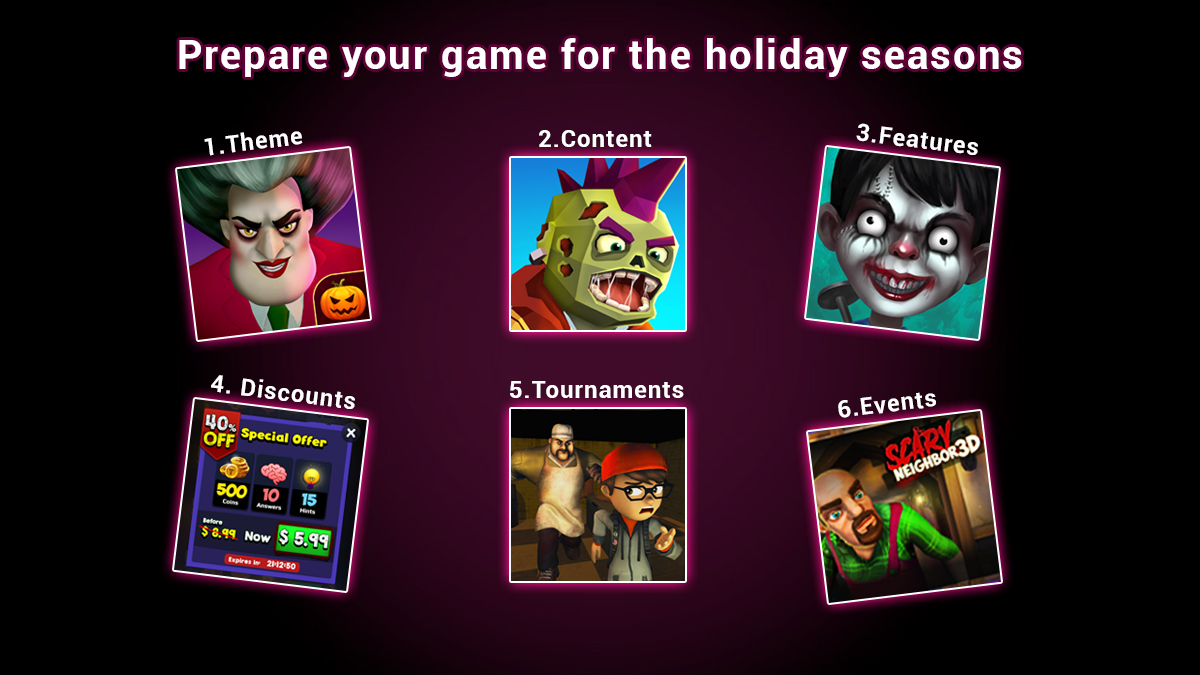 Holiday season is around and it’s an opportunity for game developers to enhance their earnings by ten fold. With my experience, spanning over a decade with game development industry, I can reliably say that revenues increase up to 300% during last quarter. There is a simple hack to increase game revenues : Update your game for the holiday season. Update your game to stay relevant and provide fresh and relevant content to users. All top game developers use this basic hack, be it Clash of Clan, Candy Crush or Scary Teacher.

Why should game developers update their games for holiday season?

How can game developers update the game for holiday season?

Game developers can provide an update to the community by making small or major changes to game play relevant to the event. Smaller changes may include rebranding the game based on theme, adding discounts or creating event driven tournaments. Major changes includes providing additional features or releasing a new game or sequel for the event.

How to update game

Updating a game for the holiday season to gain more downloads and revenues isn’t very complex. There are few basic changes that can be applied to the game to gain maximum from the holiday seasons. Game developers usually adapt following options to update their game.

Developers can also update game by providing new content. Developers update game by adding new levels, new episodes or environments based on the event. This may take more time and effort but helps in staying relevant and re-connecting with inactive users. Famous indie game developer of Wild Terra, updated features and contents for Christmas update during holiday season of 2018.

At times, game developers develop a new game or sequels around the holiday events. Horror games will be extremely popular during Halloween season, and so may be card gifting or Santa Claus related games during Christmas. If you are planning to build a game and reviewing game concepts, you can consider this. You can read our blog to understand how external factors can inspire for a game concept. Similarly, few game developers launched soccer games during soccer world cup. This is usually expensive and time consuming and requires lot of planning upfront but helps in gaining initial momentum.

Multiplayer games or the ones using leaderboards, usually come up with specialised leaderboard for the event. This allows people to compete for a certain duration. Not only it reset the leaderboard temperately and allows new players to grab a name on the leaderboard, it also provides opportunity to compete on new environment of levels. This enhance community engagement for the game.

There are various benefits for updating the game for holiday season. Not only it helps in staying relevant and earn more, it also provides an opportunity to get higher visibility on game stores. Few of the benefits are listed below

Game update allows inactive users to come back and try new content. This is an opportunity to re-engage with consumers. Almost 30 % of the in-active users come back based on updates.

Updates that have positive impact on retentions allows to get higher Daily Active Users , and helps in increasing app store ranking. Scary Teacher, got huge increase in its popularly after its major update.

Game updates are a simple hack to stay relevant and get more revenues during holiday season. We highly recommend updating game once a quarter and twice in last quarter. If you have low budget, you can aim for cost effective features but must update the game to keep it relevant and active. GenITeam is full stack game development agency and can help you in updating your existing game. Please reach out to our experienced staff for getting quotes and updates published on stores.