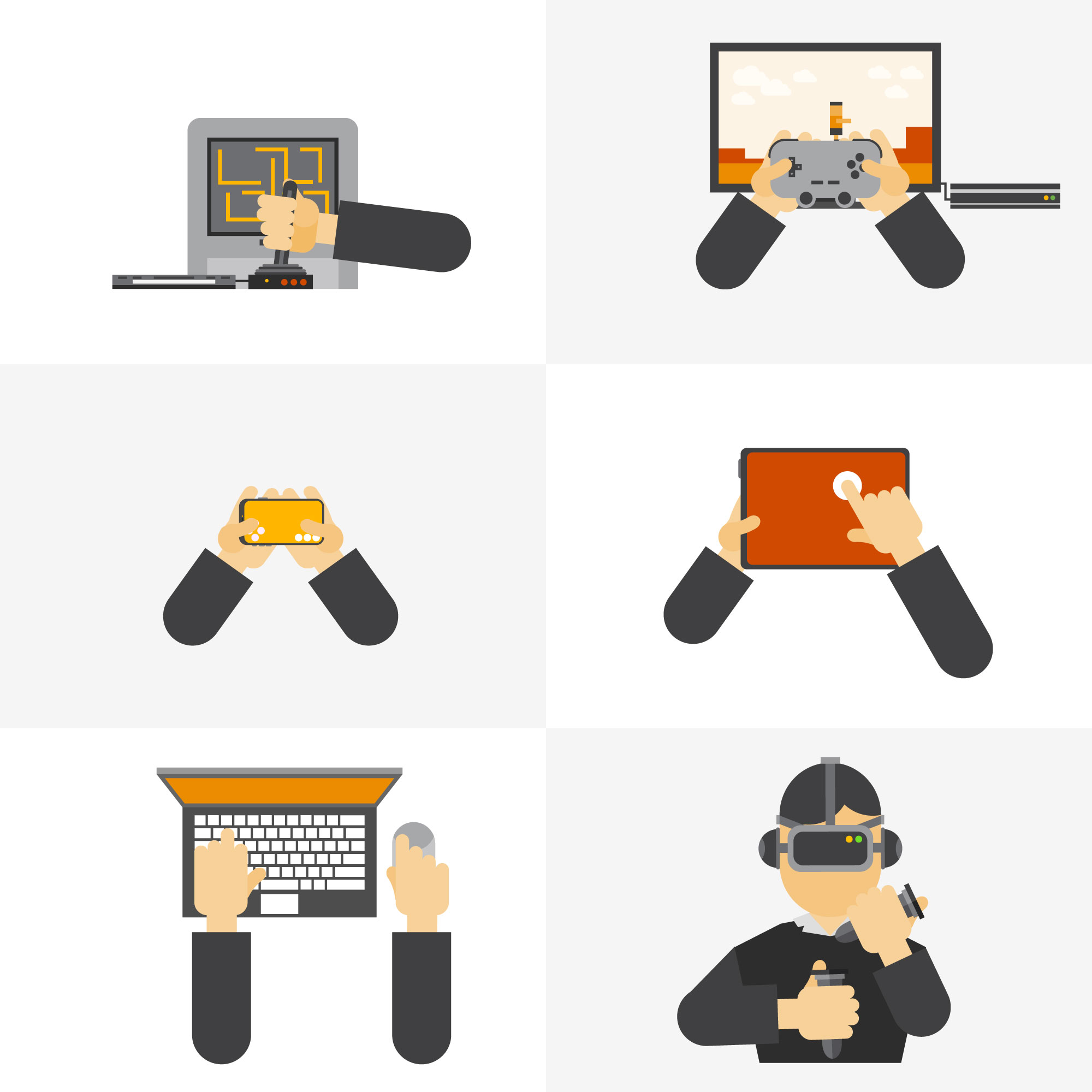 Console games have been played for almost fifty years. The availability of classic games on the consoles such as Super Mario Bros. quickly shifted the public interest from gaming arcades to home consoles in the 1970s. The increased popularity encouraged many companies to work harder and newer people to come in the console game industry. Soon there was a wide array of companies manufacturing gaming consoles and and providing newer unique games, rather than the arcade focused ones of before. This development continues to this day as we see the Eighth Generation of consoles in the likes of the Sony Playstation 4, the Microsoft XBOX One and Nintendo Wii U.

Mobile games were not very common initially and were only part of a few mobile phones at first. However, as mobile phones reached the mainstream public these games started getting more attention especially from a younger audience. Children would borrow their parents’ phones to indulge in the classics such as Snake or Bounce. Although people knew about mobile games they did not become  highly popular until the launch of smartphones. These had features such as internet connectivity, an interactive touch screen and a larger vibrant screen. They opened up new avenues for mobile phone games including newer genres and easier controls for the games. Also the application store for these smartphones allowed users to choose the game they wanted rather than being stuck with the ones built in their phones.

The life of the console games has allowed them to evolve and have a huge variety of genres. The most famous genres in console games are action, sport and Battle Royale. The public loved story based action games and this encouraged many companies to invest in this genre. The acceptance of this genre can be seen by the fact that GTA 5 (an action game) is the highest grossing game of all time with 130 million copies sold worldwide by May 2020. The sports genre serves the substitute to physical sports and allows the gamers to dive into a virtual world of athleticism from the comfort of their couch. Battle Royale is a fairly new genre that took the world by storm with the launch of games like PUBG and Fortnite. The relatively new concept of every man for himself with limited supplies appealed the creativity of the people.

Mobile games can also divided into a number of genres. However, the most famous genres on mobile include arcade, Battle Royale and hyper-casual games. Arcade games include mobile phone classics like Fruit Ninja and Doodle Jump. The Battle Royale games soon found their way on mobile phones along with consoles. They were free to download and so almost all the people were able to play them. Fortnite, PUBG and Call of Duty Mobile are some of the Battle Royale titles available on mobile phones. Hyper-casual are a great factor in promoting mobile gaming as they are often the most played games on the application stores. The games involve decision making and the absence of complex strategies make them suitable for all ages. Their popularity is evident form the fact that Voodoo( a hyper-casual game developer) has more than 1.5 million downloads.

Graphics are a very important factor in deciding the success of a game. The graphic quality for console games has improved significantly. Initially, console games were 2D arcade based games. However, as the industry grew the companies invested more in the hardware of the consoles allowing better graphics. Currently, most console games run on a 1080 pixel resolution at 60 fps. This provides an immersive experience to the gamer. The introduction of virtual reality in gaming has opened the door to even better graphics as the gamers will now plunge themselves in the actual game. Another factor that affects the acceptance of a game is the depth it has that is the complexity of the story and the available choices. Story based games have been around for a long time. They allow gamers to play through an intricate story and make their own path to the ending of the game.

Mobile games are far behind consoles in terms of graphics. This is because it is not feasible to provide the heavy architecture to support high end gaming on a handheld device. Still, the graphics for mobile games have come a long way from the highly pixelated 2D games of the past. They have better graphics than those of many old generation consoles which shows how far mobile gaming has come. The depth of mobile games differs from that of console games. There is a shortage of games on mobiles that have a complex story as most mobile games are pure action or arcade based. Thus we can conclude that consoles are way ahead of mobile games when comparing graphics or depth.

A good game should allow easy interaction. Specially designed controllers are used to play console games. These have joysticks and buttons in different positions depending on the company. The game assigns each button on the controller to a particular action. Thus, pressing each button causes the character on screen to simultaneously perform that action. There are tutorials in the beginning of the games so the players can familiarize themselves with these controls. Furthermore the controls are similar for games of the same genre such as racing games will often employ the same  buttons for the gas and brakes even if they are from two different franchises.

Virtual buttons on the touch screens are used to control Mobile games. The users touch these buttons to perform certain actions. The control mechanics are highly important for mobile games as the buttons need to be placed in a fashion that they do not disrupt the display of the game. Furthermore, the buttons must be placed keeping in mind that they are not too difficult to reach on a mobile phone that has a large screen. Mobile games have to provide a complete experience using the handheld device alone. This makes it difficult for developers to design a game as they have to ensure it does not become restricted due to the control mechanics.

Console games as suggested by their name are available on consoles. The game is often on all the consoles from different companies except if it is an exclusive for a particular company. Developers design the games with the consoles in mind and so they have the appropriate graphic settings and meet the demands of the console audience. Currently, there are 3 main consoles: Sony’s PlayStation 4, Microsoft’s XBOX One and Nintendo Switch. Games are simultaneously launched on these platforms and enjoyed by all the player bases alike. The players can get a digital version the game from the respective stores of their consoles or buy a physical disc.

These strategies are used to market a new product to the audience. Console game companies spend a lot of money in the advertisement process. The trailers for these games are launched a year earlier and hence lead to hype till the launch event. Furthermore, the E3 Conference takes place every year that showcases all the games that will be released in that year. The developers give the audience an insight to the story and the platforms on which they will be released along with an expected price. The gaming companies also have online communities that keep them connected to the audience. These pages are home to game related news.

Mobile games also employ advertisement before launch. However, this advertisement is often on a very small scale. It is essentially only a YouTube trailer launched a small time before the release of the game. The main reason for this is that many developers work independently or for small companies because game development is a relatively easy task on mobiles. It needs limited investment and so little is spent on mobilizing the public and more focus is paced on the game itself.

The Console gaming industry has grown tremendously. Today the leading console game companies like RockStar and Ubisoft have enough resources to dedicate large manpower to their different games. Ubisoft may be called the largest gaming company with over 9000 employees. Some games like GTA 5 from RockStar have earned more than the highest grossing movies. The graphic intensive nature of console games requires large investment. However, once the game has launched it earns even more profit making the console gaming industry one of the most successful industries today.

The Mobile Gaming industry on the other hand has surpassed gaming consoles in their earning as seen by the chart above. The reason for this could be that everyone today has a mobile phone. Hence, these games are only as far as the application store. The potential of mobile gaming has brought along newer companies. Although these may be small scale at first they are determined to follow in the footsteps of major game companies like Voodoo that is one of the most successful companies in the gaming industry.

Mobile and Consoles are two different branches of video games that cater different audiences. They have their own perception of quality and requirements and produce their games accordingly. Currently these hold the largest shares in the gaming market. In December 2019, mobiles and tablets accounted for 46% of the market revenue with consoles following at 31%. This clearly shows that both are well accepted gaming platforms and are serving the community well. Thus their users should also refrain from arguments of superiority. After all the main purpose of gaming is having a good time.